Undiscovered: A nice romp through a cave where nothing bad happens ever. This game’s trick is that it’s presented as found footage in a second person perspective, with your character operating the camera trained on another. It doesn’t dramatically change the actual gameplay up as you’re pretty clearly steering the character in front, but it makes for some interesting moments and fun back and forth dialog. This is a solid walking sim with just a smidge more going on than most, and one whose journey I’d gladly show off to friends in the future.

Solipsis: I’ll start at the end: Solipsis is my favorite game in DX2. It’s a short one, one of the shortest actually, and as such it’s difficult to talk about without spoiling it, but this tale of a moon walk gone mad offered more tension in its runtime than some large budget horror games can manage in theirs. From its gorgeous visuals, to its fantastic use of sound, to its twists on its (admittedly few) game mechanisms, to its immersive storytelling done with as few words as possible, this was one of the best horror experiences I’ve had in recent memory. To explain exactly why would be doing the game a disservice. Dim your lights, put on your headphones, and lose yourself for the few minutes it asks of you. You’ll be glad you did.

To the End of Days: And you thought Carthanc from DX1 was loud? This prequel will have your neighbors calling the police because of all the literal screaming and blown-out gunshots. I don’t know what Scythe Dev Team has against eardrums but I hope they never stop their assault; it takes a particularly skilled set of hands to make sonic obliteration sound this good.

The easiest way to describe TtEoD is bootleg mid-apoc Max Payne in first person. Like Carthanc before it you’ll be sprinting through levels, but this time you have a gun with an axe strapped to the front and a gravelly voiced protagonist who’s pretty unhappy about the whole comet ending the world thing. Gameplay-wise what you’ve got here is a solid fast-paced shooter with some fun visual filters, as well as a post credit surprise that’ll leave you giggling. Like Carthanc before it this is one of the more replayable entries in this set and I continue to be impressed by this crew’s output. More please.

Another Late Night: Click, scroll, and read your way through a desktop simulator that’s essentially an interactive creepypasta. Your receptiveness to that sub-genre will likely determine how much fun you have with it. It’s not my thing, but it was well executed enough that I think anyone who does enjoy its ilk should find it compelling. What I most certainly did enjoy was digging through the folders, but I’ll leave those for you to discover. 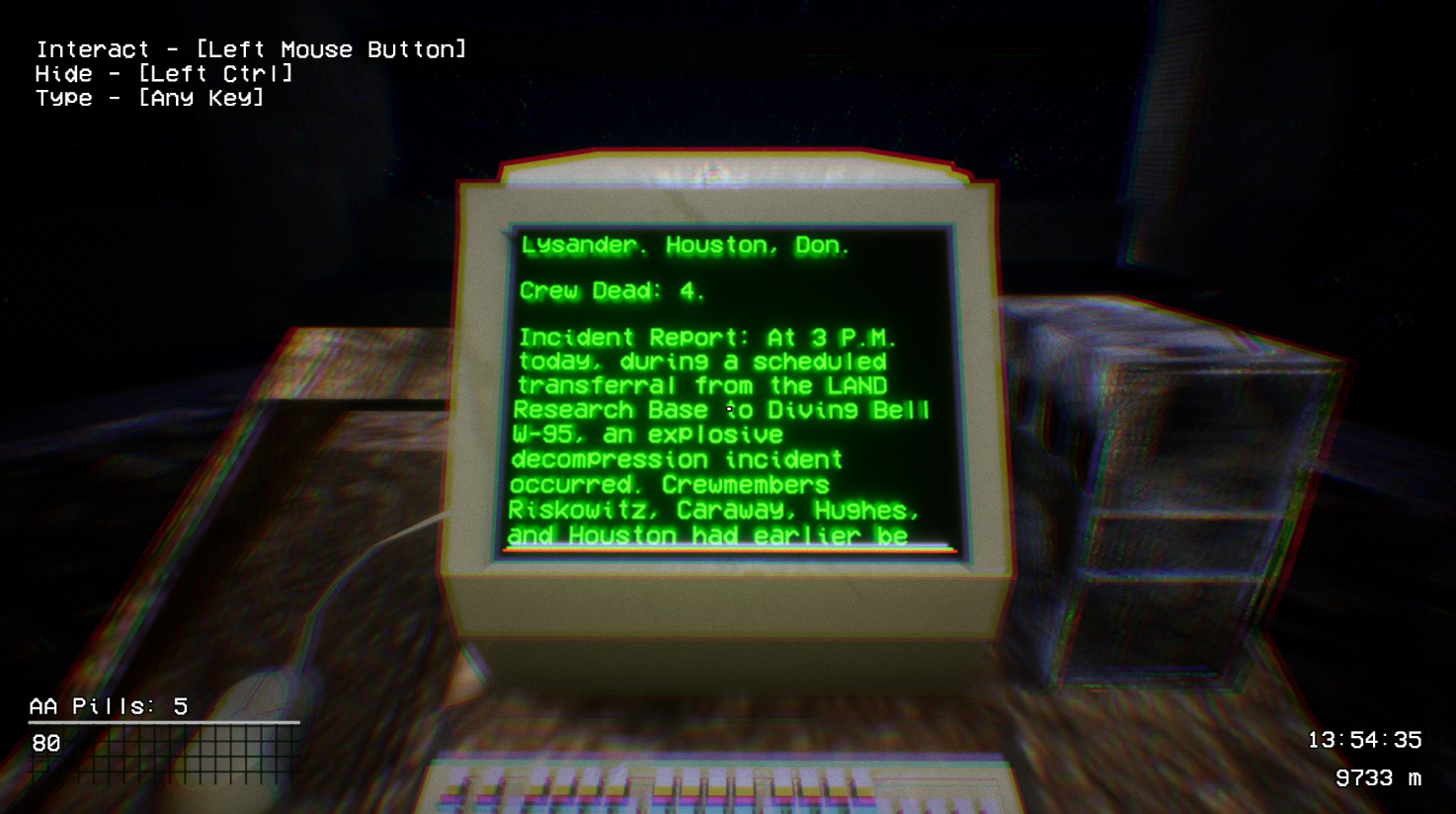 The Diving Bell: A mishmash of mechanisms that somehow meld into a cohesive whole, The Diving Bell has players wandering around an underwater station in which they’re the last survivor. Maybe. Probably.

You’ll spend most of your time performing menial tasks as the state of the station gets progressively more dire. Managing your character’s mental state and medicating in real time after looking out the window a bit too long gives this game an excellent sense of immersion. Rather than assault you from the get-go DTB opts for a slower burn, ramping up the intensity and stakes all the way until the very end. I did run into the occasional issue with collision and doors behaving oddly, but the game never broke so it’s a minor quibble. Overall I found it effective, efficient, and sort of entrancing in its loop.

Also…don’t tell anyone I told you this, but if you want a completely different experience on a replay bring some friends and play this game while looping Ween’s “Ocean Man”. Guaranteed quality entertainment.

Touched by an Outer God: A goofy Doom-ish shooter where you shoot cyclopean levitating chicken breasts with antlers, then eat ‘em for upgrades so you can shoot more difficult levitating chicken breasts with antlers. That isn’t meant to be dismissive – this game is as funny as it is fun. Choosing how to manage your tech tree of upgrades is satisfying, and there’s some replayability potential with maxing out different abilities since you can’t have it all in one playthrough, as well as nudging up the difficulty if you’re feeling fancy. The shooting starts out fairly unremarkable but by the end you can really move and have some variety in your attacks. Great gameplay combined with a cool cel shaded/2D mixed style and a well executed, if predictable ending make TbaOG a winner that you’ll want to revisit.

The Thing in the Lake: A new game from the creator of World of Horror. Like World of Horror, the game’s gorgeous and atmospheric with some seriously haunting music and presentation. Unfortunately it shares another trait with World of Horror, that being progression via trial and error. The constant restarts reminded me of old horror flash games and not in a charming or nostalgic way. The game will instakill you and force restarts over and over and you just have to beat your head against it until you finally stumble into the correct path that’ll let you live, or in some cases die the “correct” way. I may be stupid, but the amount of tries it took to wrangle some of the scenarios really tested my patience. It’s a shame because the presentation is fantastic both visually and aurally, but I can’t say I found it particularly enjoyable to actually play. At least it found a way to make a monkey straight up terrifying.

Dread X 1 was a great time, but also all over the place both in terms of quality and technical functionality. The highs were really high, but the lows were equally low. By contrast Dread X 2 is a considerably smoother experience from start to finish. I never encountered a full-on crash or issues that severely impacted my ability to play the games with one aforementioned exception in The Toy Shop. This is a slick, sleek bundle of spooks and if the concept intrigues you, Dread X 2 delivers on it better than its predecessor thanks to its phenomenal hub and a batch of games that are more consistently solid overall. The indie horror anthology approach continues to work wonderfully here and I’m very much looking forward to seeing more from all involved.