Mary and Tom Russell run Hollandspiele. They do a podcast called The Mary and Tom Show in which they address life, the universe, and the company business. On October 30th, 2017, the course of HS was forever changed when Mary suggested that Tom create a new game in her Table Battles system. But not another set of historical battles in miniature as per the standard thus far, no. Pre-historical battles. Battles in which the probability of a T-Rex wrecking havoc while maintaining historical grounding was greater than 0%. Tom agreed, albeit without committing to a specific date. And now that promise has been made good on with the 50th game in their line – Dinosaur Table Battles. It is now as real as you and me, dear reader. There’s probably a lesson in here about speaking things into existence but I’m not even going to try to suss that out. What I can do is talk about what I believe to be the first commercially available board game that’s also an anniversary gift.

DTB deviates from its parent system in several key ways, not counting the obvious shift in subject matter and accompanying artwork, which is wonderful by the way. Rather than re-enact set historical scenarios DTB begins with a team draft from 10 of the 15 possible dinos. This change is massive in how it impacts the game’s replayability and means that the units here are not limited to screening attacks from very specific foes. If the system ever looked interesting but the framework was a concern or turnoff this is a far more approachable starting place.

In my review of The Field of the Cloth of Gold I mentioned that Russell likes to design games where your actions come at a cost. DTB continues that trend in several ways: hurting yourself to enable bigger attacks, breaking your units’ abilities to dodge damage, choosing which dino to sacrifice in a pinch, ditching a unit in the draft so no one can have it instead of adding one to your team, etc. But by far the most significant is The Golden Rule of Table Battles: “if you can react you must react, and if you react you can’t attack”. It is this principle that makes the system function, makes it what it is, makes it go, and I have to explain it because it’s really freaking weird. 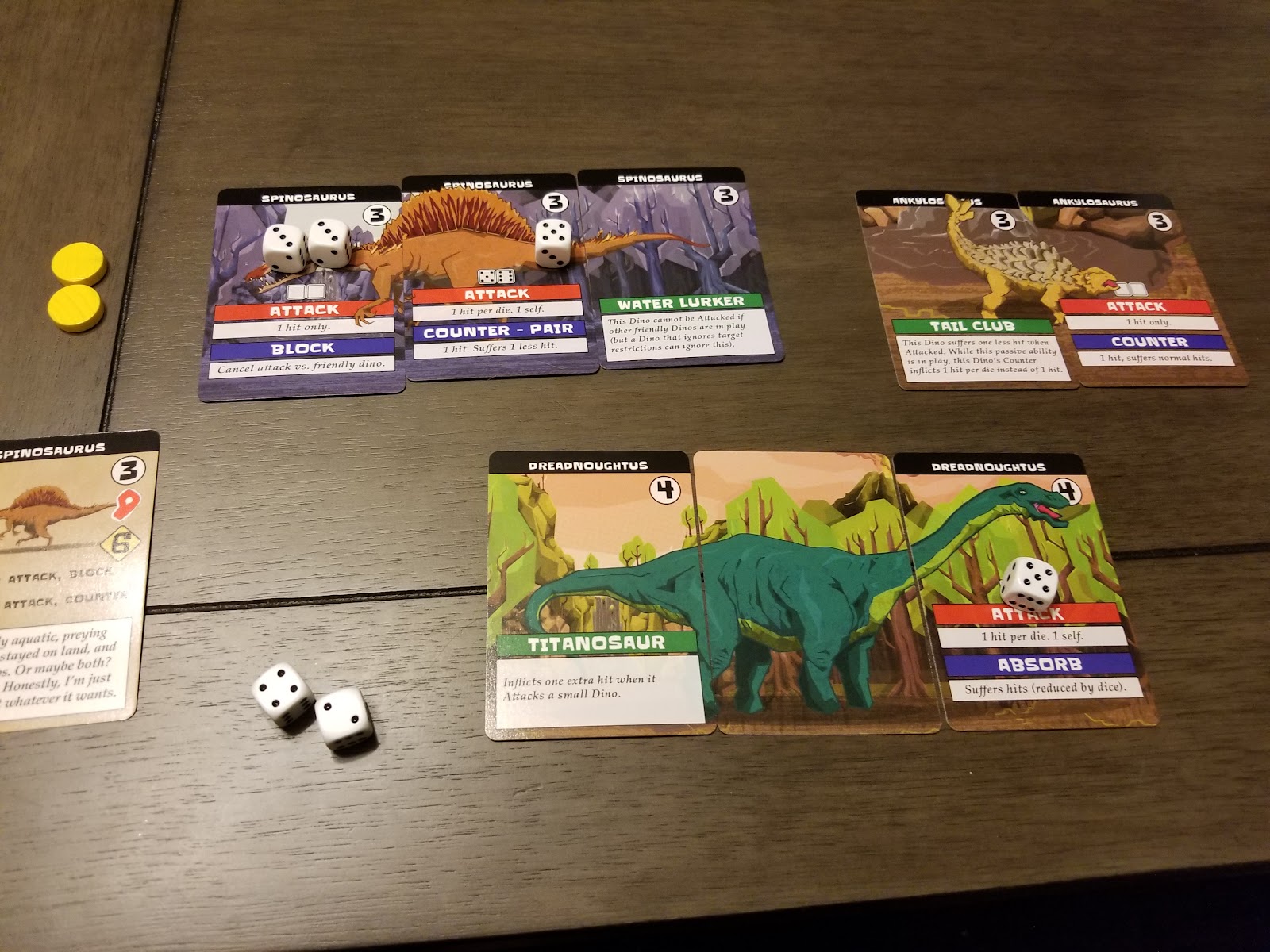 Turns happen in two parts: attack if you choose to, and roll all dice in your pool. When dice are rolled they’re placed on your dinos. Attacks are fueled by spending dice so you very much need to allocate the math rocks. However, every attack also comes with a possible defensive reaction that can be procced by an opponent’s attack. And if a reaction occurs, no attack for you next turn. Just roll, place dice, and prepare to keep blocking your opponent’s blows until they let up long enough for you to turn the tables.

This gives combat in DTB a curious kind of momentum. Once one side throws a punch they get to continue wildly swinging until they finally decide not to or can’t anymore, and the defender is forced to take half-turns until their opponent finally wears out. Then the players typically switch roles and so on until only one squad is left standing. It feels less like a team sport and more like a boxing match, with each player taking turns to throw probing punches then batter the other into submission before they can do the same. 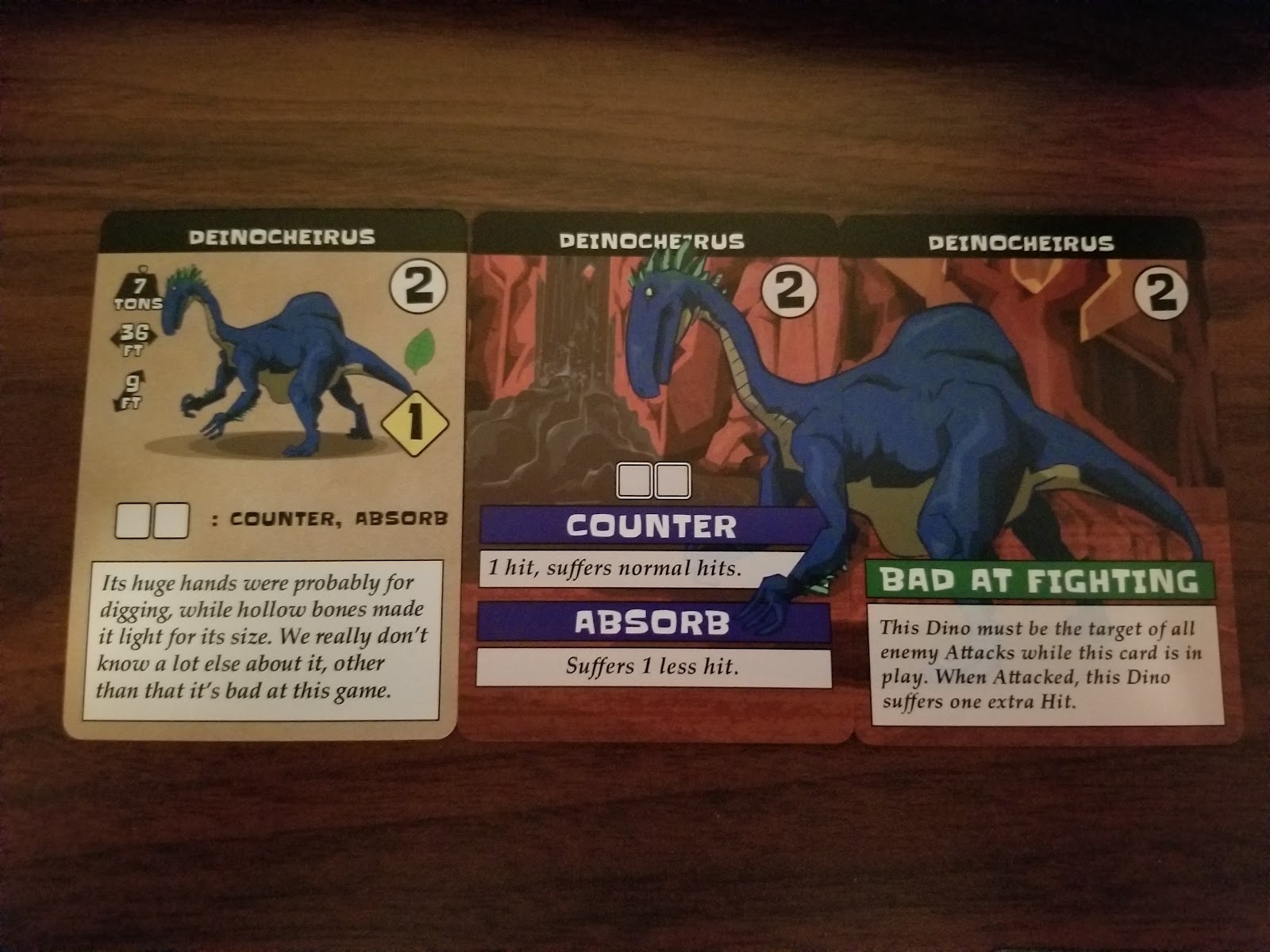 I liked that boxing simile, but it kind of works and kind of doesn’t. I mean it’s accurate, don’t get me wrong, but there’s no potential for a dramatic 1st round KO here. If I were to use one word to describe the pace of DTB it would be “attritional”. Every session is knock-down-drag-out, with players typically whittling each other down rather than making big swings as it’s considerably difficult to not have those big plays consumed by a mandatory reaction. This grindy tit-for-tat combat succeeds at making each individual tactical choice feel impactful, but it also means that most games end in two half-broken teams desperately flailing at each other trying to land one halfway decent kill shot. It also left me wondering if Dinosaur Table Squabbles wouldn’t have been a more descriptive title. Maybe for the inevitable expansion, who knows?

There are some quibbles that can make learning the game a bit tricky. The cards players draft with are missing each dino’s unique passive ability, which is often what makes them function in the first place. Some effort to circumvent this has been made via a numeric power ranking that players can use to gauge relative strength, but dino synergies are so much more important than raw numbers that it only works to a point. That said this is fixable by just putting all the dino cards on the table while you’re drafting. Slightly more awkward are the reaction rules, which managed to confound each time I taught the game. To the rulebook’s credit these are laid out in one place (absorb and block defend other friendly dinos from attack, counter defends the targeted dino) but it does mean that your first games will likely involve a fair amount of “wait this doesn’t work that way” and “hold on that last attack couldn’t actually go through, let’s roll it back”. Prepare to mark your wins with asterisks for a while before both players get comfortable and the game gets “good”. 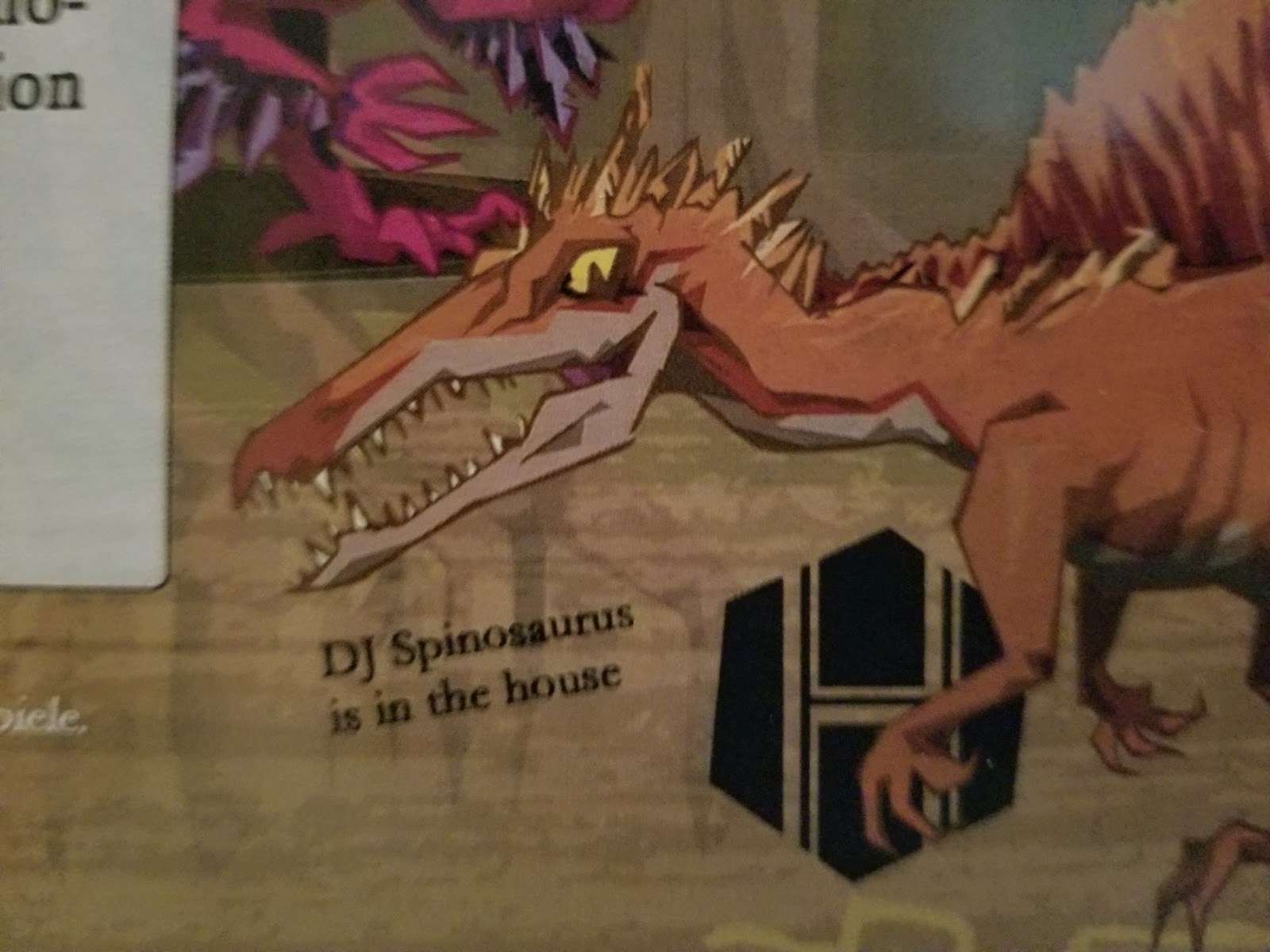 And yeah, this most certainly gets good. In early matches it’s entirely likely that your games could be determined by the draft as mistakes are made and you get the butter beaten out of you by a bad matchup. Maybe you accidentally take Deinocheirus, who’s intentionally a dingus. Once players are on equal footing and have some game knowledge it comes alive. The trick DTB pulls is that it’s secretly a butterfly effect game; every decision affects and in some cases creates the decisions you’ll be able to make down the road. Being able to see the seams, navigate, and operate is where the true meat of the experience lies. Despite its initial goofiness there’s a lot to dig into here. It’s not my favorite HS game at 2 – that’s still Field and I also adore Meltwater for its beautiful brutality – but it’s strong enough to stand on its own.

Will this be a mainstream success for Hollandspiele? No, almost certainly not, it’s just as weird as the rest of their stuff. But much like the rest of their ludography it’s intentional weirdness, applied weirdness, weirdness by design. It’s a fighting game cabinet you can only operate with chopsticks that’ll still have you burning through quarters because you want to see if you can make a particular combo work, or you just want to go for a haymaker with Triceratops again, or dang it, you just want to see some dinosaurs tussle on the table.