Board games are difficult to categorize. Film and video games tend to be relatively straight forward – when in doubt just add more labels – but board games are more like music in that they can sometimes be nebulous hybrids. How many eurogame mechanisms does it take for a game to BE a eurogame? And what makes a game euro in the first place? It’s ambiguous at best, impossible at worst. So understand when I say that The Field of the Cloth of Gold is a eurogame with no hesitation I mean it. From its historical grounding (the 1520 event of the same name), to its aesthetics (wood bits and canvas board), to its scoring (we’ll get there, for now just trust me), you could not ask for a more archetypal old-school euro released in the year of our lord 2020 than Hollandspiele’s newest.

I’ll leave the historical summary of the eponymous event to folks whose formal history education didn’t end at community college night courses. Check the image below from the back of the box if you want the context. What I can do is talk about what TFotCoG (Field from here on out because good lord that is a powerful acronym) actually is, how it works, and why I absolutely adore it. 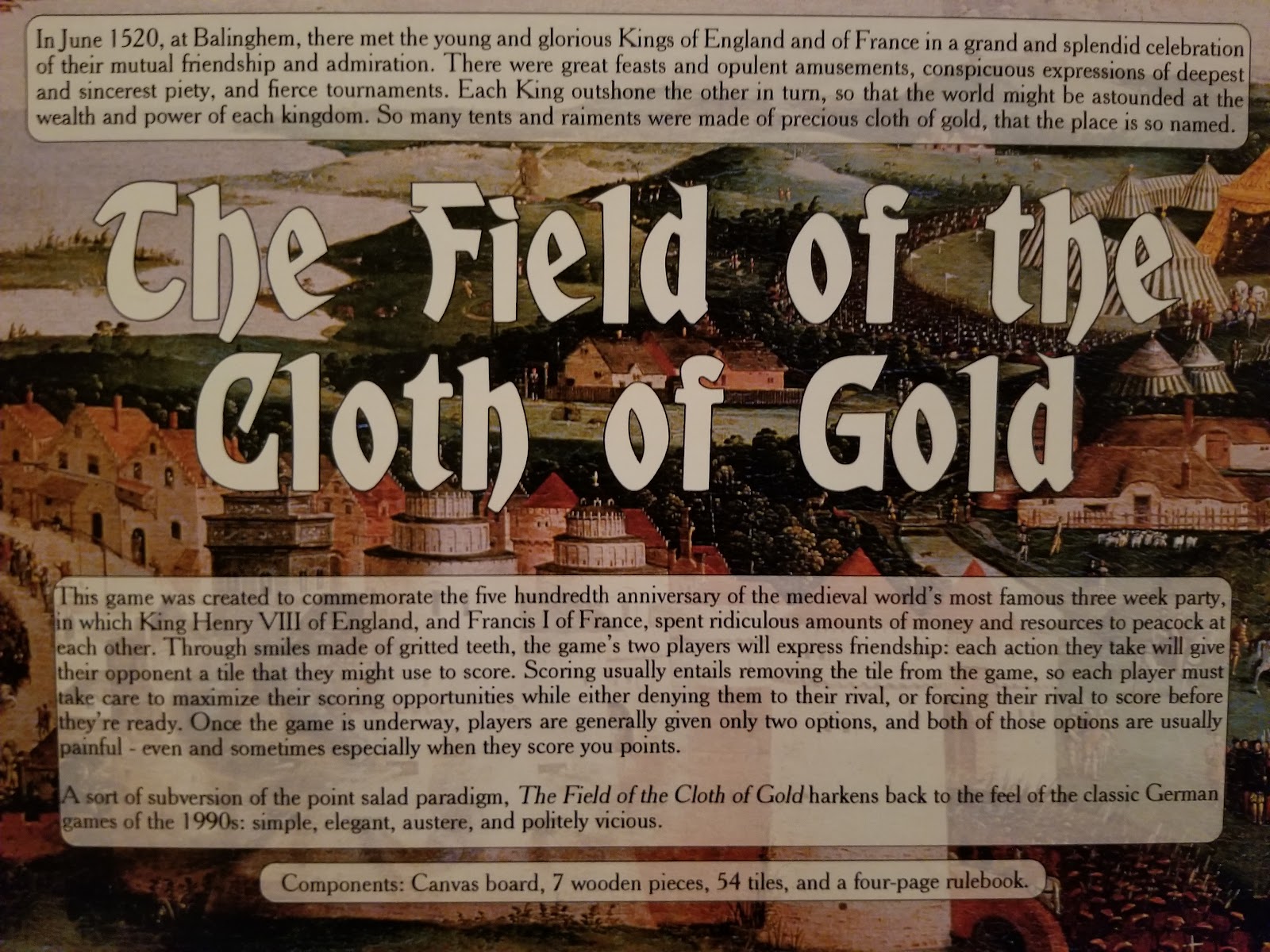 Field is an incredibly simple game. So simple, in fact, that I’ve heard “that’s it?” asked after a rules summary. If you’re familiar with Tom Russell’s lighter games, particularly Northern Pacific, this likely won’t surprise you. Every turn consists of the following: move one of your tokens to an available space, hand your opponent the tile that’s there as a gift, and take the action that the space offers. Done. The actions are equally straightforward: reveal and turn in some tiles for points, move the dragon token to block spots, draw some tiles, that’s about it. Your goal is to make points out of lemons, most points wins.

I apologize for burying the lede but I wanted to make it clear that the game is, mechanically, lean to the point of almost being skeletal. I intentionally glossed over the game’s twist – the gifts. Every action taken starts by handing your opponent a tile. As a matter of fact the vast majority of the tiles gained during play will be gifted to you by the person you’re trying to whomp, and vice-versa. There is no action in this game that doesn’t advance your opponent’s position, often significantly, and that is the true crux of the game. Imagine if 90’s leather jacket Knizia put two knives in a box and said “you’re only allowed to use these on yourselves, now win”.

Navigating this munificent minefield is a blast. Weighing your options, potentially taking worse actions just so you don’t hand more ammunition to your opponent, straight up giving them points just so you can get something done? That’s the good stuff. Revealing a fistful of blue tiles for a heap of points is a top notch “read ’em and weep” moment but it’s always tempered with hesitation. Or do you go for the hail mary and intentionally score low while acquiring as much gold as possible, attempting to slingshot past your opponent? Every turn delivers the finest masochistic agony on par with the misery farming and impossible tasks that the genre used to be known for. 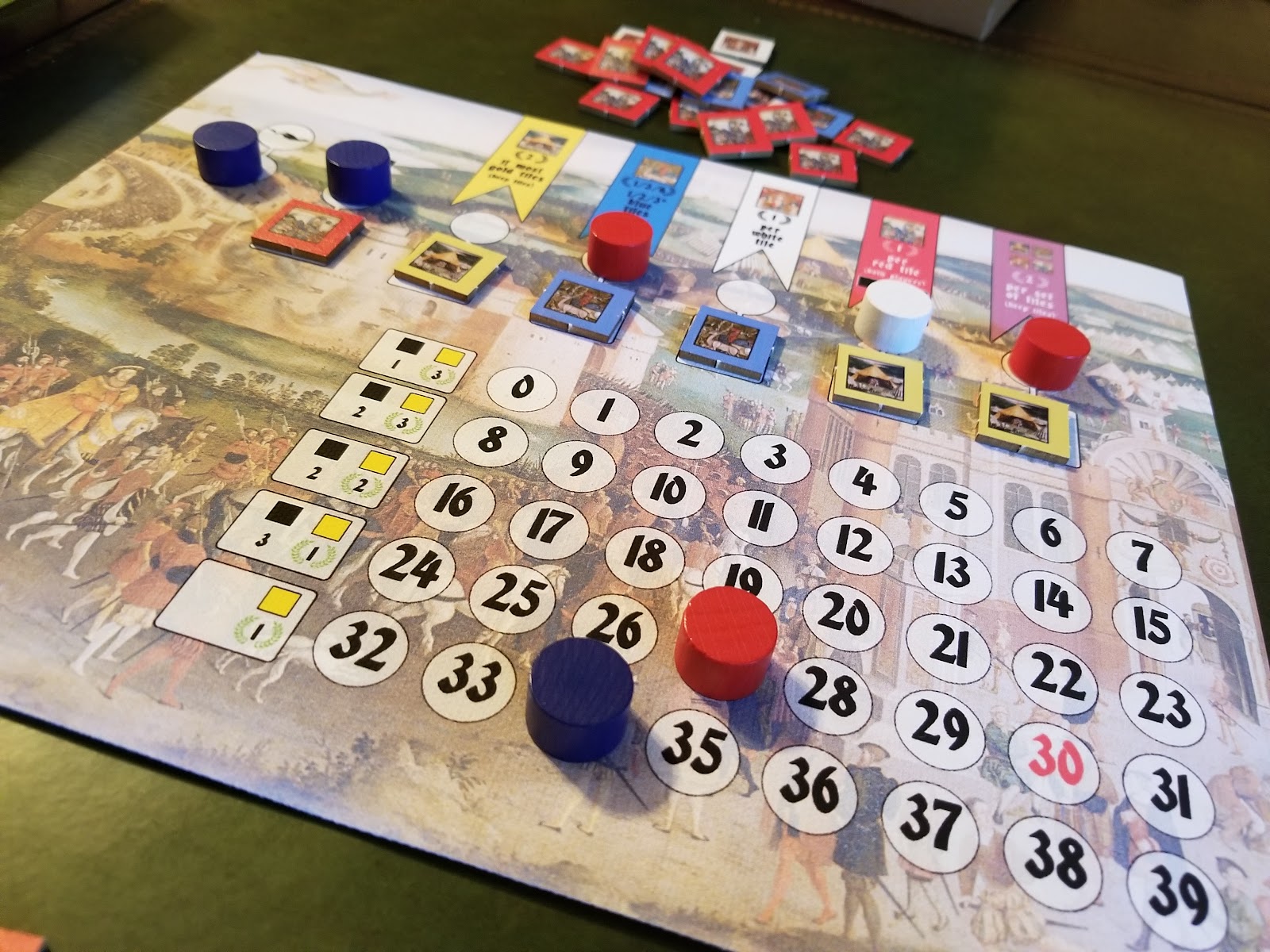 Russell’s achievements here are twofold: she’s created a game that feels as if it time traveled straight out of the golden years of eurogames, back when their mechanisms were fresh, their rules were slim, and their corners were sharp. It plays quick, teaches even quicker, and makes for a great “best out of 3” set with a partner. But crucially and arguably more importantly, she’s also telling a joke. Calling this a euro game in the current market is a thumb of the nose at what the genre has become over the last 15 or so years. Lest you think this is me making a wry observation, no dear reader, I’m dumb as hell. She literally calls it “a subversion of the point salad paradigm” on the back of the box. But I’m going to take it a bit further.

Much of Hollandspiele’s catalog consists of games that have a very transparent argument. This Guilty Land, Meltwater, An Infamous Traffic, etc. While less political and impactful in its subject matter Field also has something to say: that it is a euro, and a quintessential one, despite the mutations and reclassifications the genre has undergone over the last two decades. It’s a reclamation of the label that does so with great confidence and a playful wink. Mean is back on the menu and Field is a course worth having.

One thought on “The Field of the Cloth of Gold – Review”