A solid horror anthology for a good cause.

In an unprecedented move I’m going to subvert reviewing convention and frontload the opinion: if you’re a horror fan, Dread X is basically a no-brainer. For $7 you get 10 playable teasers and $2 of that total goes to Doctors Without Borders. I’ve played this thing for about 7 hours at time of writing and will likely add more time to that revisiting favorites with friends. The value proposition here would be insane if they weren’t donating proceeds to charity, but that pushes it well past the edge of recommendation. Cool? Cool.

The Dread X Collection is a game jam-esque collab between 10 different developers. The premise is quite clever: each submission is a playable teaser (P.T.) for a horror game that was made in a week. As you might expect, the games here run the gamut from shooter to walking simulator, from mildly unsettling to intense, from half-baked to full on brilliant. I’ll be going over each game in brief to give you an idea as to what you’re in for, as well as give some self-indulgent opinions on how effective each game is as a P.T. What I won’t be doing is spoiling them as surprise is the entire point of many of the games here. Let’s get into the meat of it. 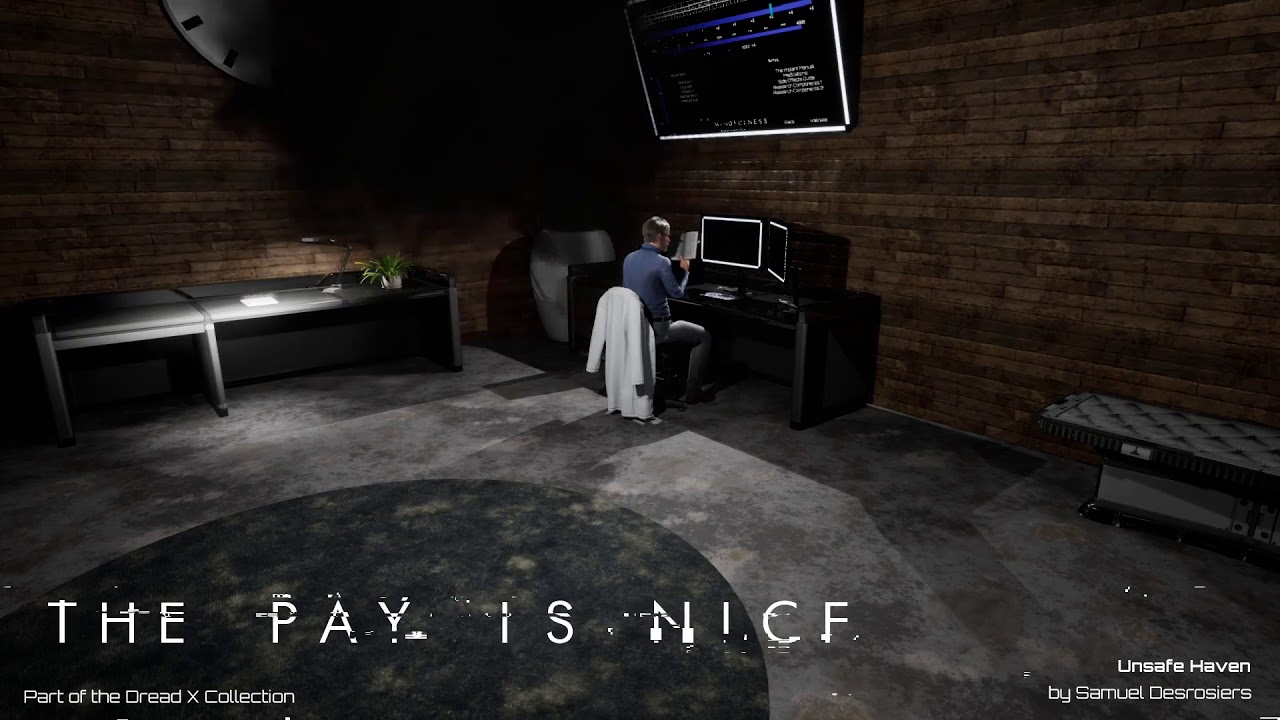 The Pay Is Nice is a playable parable about the dangers of in-group/out-group bias. Its notable qualities include being the only game with tank controls and being 5 minutes long.

I’ll try to be fair. TPIN executes on its concepts pretty well. It just sets a weird precedent by being the first game on the list as it’s by far the shortest and ends abruptly, even for a P.T. The Dread X website calls it “the most chapter 1 out of any game in the collection” and I think that’s accurate, but unfortunately that leaves very little room for notes. I would like to see the ideas here expanded on, but that’s like saying you’d like a meal after eating a single hors d’oeuvre. 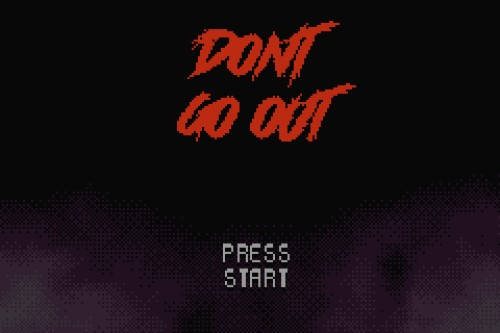 Don’t Go Out places players in a grid, gives them a hand of cards and some action points, and demands that they scramble to survive as creatures and meat-moss creep in for the kill. Despite looking like a horror-themed Fire Emblem or Shining Force that’s really not what you’re in for here. DGO is essentially a puzzle – how do you get to morning while keeping at least one person alive? Unfortunately this is much more an exercise in trial and error than anything else.

DGO is not particularly interested in explaining how it works, what the terms on its cards mean, or what anything in its environment actually does. At first I thought this was great; a difficult tactical horror puzzle is an absolutely brilliant idea! What frustrated me was that the actual solution was uninteresting and anti-climactic to the point of feeling like a joke. I won’t get too far into it here, but you won’t need to figure out nearly as many of those cool card effects as you might initially think.

As far as its effectiveness as a P.T. goes, I’m torn. I think something like this could work, but it would need to actually make use of the concepts it introduces. The best P.T.s demonstrate why their game should exist with gameplay but DGO is essentially a playable elevator pitch. There is a great idea somewhere in here, to be certain, but if I were a publisher I wouldn’t greenlight it in its current state. 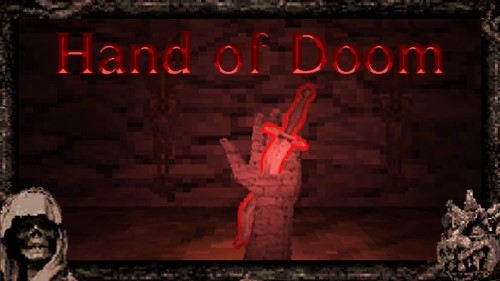 Inspired by old school RPGs, Hand of Doom will have you breaking out the notepad to scribble down incantations as you walk its eerie grounds and cast spells to progress. It starts simple, with casting spells feeling almost like a game of Simon, but by the end of it you’re deciphering several-part chants and incorporating more than just words.

I found this one incredibly charming. Talking to weirdly-titled wizards, wandering around, and learning spells of a dubious nature was a great experience from start to finish. The spells are varied both in effect and delivery which makes casting them never lose its luster. Playing it felt like I’d discovered a bootleg of the imaginary game that Jack Thompson thought he was crusading against years ago. Naughty stuff.

This would be one of the most easy P.T.s in the collection to expand upon. The gameplay loop of discovery into experimentation into progress is already bang on. All it needs is more. More spells, more buttons, more areas, more dialog, more more more. I would gladly play a full version of this, no question. 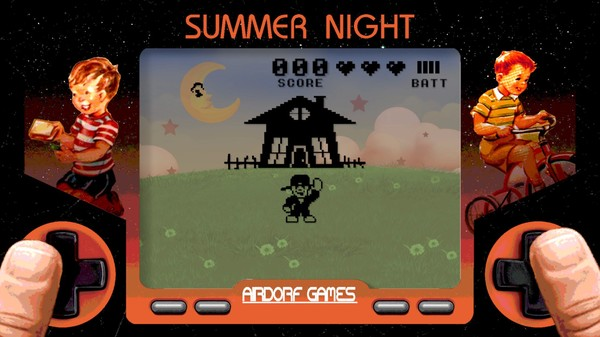 Remember the old Tiger handhelds? How about Game and Watch? Airdorf sure did, and Summer Night proves it. The game is like a playable version of every “my video game is haunted!” copypasta, but it executes on that trope with enough creativity and restraint that it works and works well.

As you play the game things start to take a turn, but Summer Night is more interested in showing off than replicating the difficulty of the games it’s emulating. Your life gets topped off for each section allowing you to make mistakes with minimal consequence. It’s not a spoiler to say the game will surprise you, so that leniency is welcome.

This is one of those games that is impossible to explain in detail without ruining it. What I will say is this: I played this game with a friend watching. The tension of this one was palpable but we more or less thought we had its twists figured out. Then it pulled one last trick on us so devious that we audibly cheered on completion. We cheered a video game. That’s worth something. More like this please. 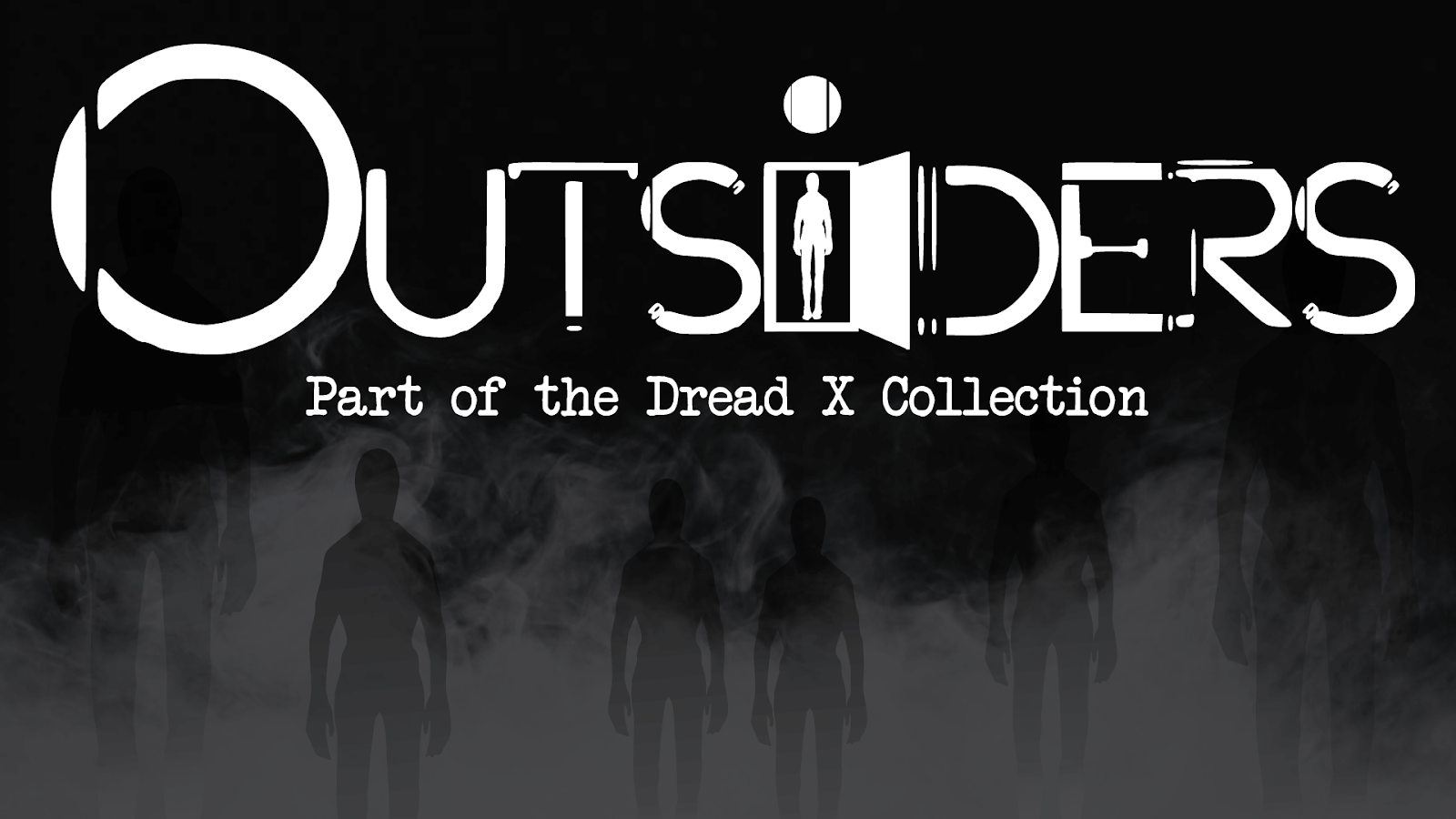 My initial impression of Outsiders was positive. Waking up in a creepy house, finding items and keys with no idea what they were for, and watching things gradually escalate into full-on horror until I eventually died was a great experience. Then I realized what the game’s actual goal was and my heart sank: this is a riff on the Slenderman/Baldi’s Basics/[insert popular YouTube horror game here] formula. You may not be finding pages but the actual goal is the same, and it comes with all the frustrations of its forebearers.

To be fair it also comes with some innovations. Repeat plays reveal hints that will help you figure out how to progress, as well as what exactly is going on in the house to begin with. Between this system and your own attempts you will eventually break through and “solve” this one sooner than many of its contemporaries. To be frank I still found this exhausting. Outsiders took by far the longest time to complete of all the games here, and most of that was spent looping the same tasks over and over. The changes in the house only did so much to make that better.

So should you complete Outsiders yourself? Hard to say. If you enjoy this kind of game this is a much better take on it than most. The changes on each run add variety and the atmosphere of the house is well executed. Without ruining it the ending is completely off the wall and re-contextualizes the entire game, but I just can’t help but feel that the juice wasn’t worth the squeeze. The corresponding essay for this game in the main menu is a retelling of the tale of Sissiphus, which has me thinking the devs did everything here intentionally. I guess I’m just tired of pushing boulders.